When nice people have a meltdown: God of Carnage at the Theater Barn 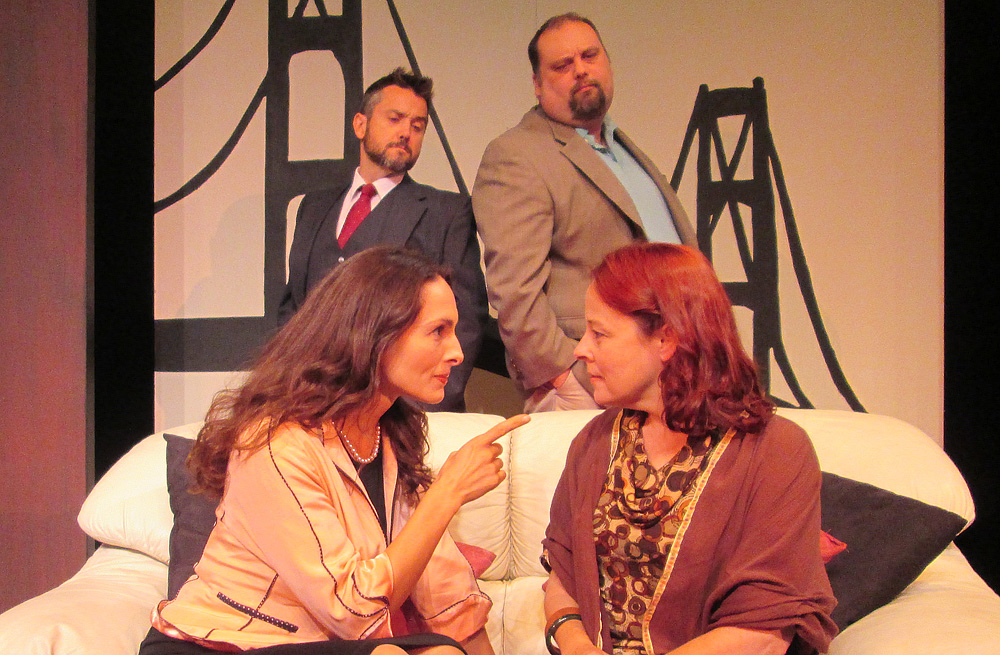 When nice people have a meltdown: God of Carnage at the Theater Barn

Brett Milanowski and Erin Waterhouse in God of Carnage at the Theater Barn.

God of Carnage at the Theater Barn
Theatre Review by Gail M. Burns and Larry Murray

Larry Murray: At first, I was lulled into the thought that God of Carnage at the Theater Barn was going to be a civil, if testy exploration of the issues surrounding a playground fight between two boys. The two sets of parents meet to calmly discuss the situation in this gem of a play by French playwright Yasmina Reza, translated by Christopher Hampton. The words and tone changes as the polite niceties soon give way to more primal behavior.

Gail M. Burns: In present day Brooklyn Michael (Aaron Holbritter) and Veronica (Kathleen Carey) have invited Alan (Brett Milanowski) and Annette (Erin Waterhouse) over to discuss the fight between their eleven year old sons. It seems that Alan and Annette’s Benjamin has whacked Michael and Veronica’s Henry with a stick, resulting some superficial injuries and two broken teeth. The adults, who have not met until this encounter, are gathered awkwardly to discuss and “resolve” this crisis.

Larry: With direction by Phil Rice, this dark comedy comes as close to being the theatrical answer to an R-rated movie as I have ever seen on stage, as four grownups duke it out using every sort of humor you can imagine, from deadpan cracks to gross-out gags. There is something wickedly delightful in being able to watch other people’s decorum go south along with their marriages, and it is obvious that the actors have managed to cross the fierceness of Albee’s Virginia Wolf with TV’s laugh-out-loud characters in The Honeymooners.

Gail: Hampton has smoothly morphed Reza’s upper-middle class Parisians into upper-middle class New Yorkers – Alan is a lawyer, Annette is in wealth management, Michael runs a wholesale business for household hardware, and Veronica is a professional do-gooder and author. Michael and Veronica’s living room, where all the action takes place, is sleek and well appointed, with expensive art books ostentatiously displayed on the coffee table. Abe Phelps has designed a smart set, which, although spare, is also crowded enough to give the actors a challenge negotiating it and allows Rice the opportunity to create a variety of stage pictures.

Larry: In the end I found something to like as well as to loathe about each of the characters. Brett Milanowski as Alan was about as loud, inconsiderate and oblivious to other people’s feelings as any lawyer I have ever met, while Erin Waterhouse as his wealth management wife Annette seemed completely out of touch with her real self.

Gail: There are a group of outstanding theatre artists living and working in the New York Capitol Region who we barely get to see in the Berkshires. Neatly situated halfway between the two, the Theater Barn does a great service in luring the likes of Waterhouse, Holbritter, and Carey over our way. Milanowski was the only unknown quantity for me in this production, and he does not disappoint – I understand he has played this role before in the Boston area where he lives and works. Carey is an actress who commits fully to every role she plays. A petite woman, she is physically fearless and the audience loved it when she literally took flight as Veronica launched into full attack mode on the enormous Michael.

Larry: The actors did an incredible job, throwing themselves into their roles, right down to the finest details like exchanging knowing looks, and doing a slow burn while the other half makes a fool of themselves. Together as husband and wife, and then as husbands vs. wives, the dynamics of their relationships kept changing, especially once some rum was introduced into the picture.

Gail: There are obvious comparisons to Edward Albee’s Who’s Afraid of Virginia Woolf? but Reza’s play is less than half as long and she gives her two couples a clear stress point from which to start. And Albee’s couples are painfully childless. Men and women are very different animals, and yet heterosexual couplehood is necessary for the propagation of the species so a certain degree of coexistence is necessary to achieve that end. Ultimately all spouses both love and hate one another, and no ground is more bitterly contested than that of child-rearing. The “boys” do gang up against the “girls” before the night is out. The children in question are both male, and the men have a very different take on what happened between their sons and how the situation might be resolved, if resolution is even necessary.

Larry: It didn’t take long for director Rice to ratchet up the actors for this physical marathon of a play in which there were few moments when someone wasn’t moving, fussing or collapsing. Adding to the concern over the boys making up, there is also psychic trouble as we learn about Nibbles the Hamster, and Michael’s disposition of the critter in the middle of the night. If he is willing to kill a helpless hamster, or for Alan to lie to the public, what else are we capable of?

So we have a boy with two broken teeth, a murdered hamster, and the ongoing worries about the knee operation and prescriptions for Michael’s mother. Then there is the evolving crisis of Alan’s client, a pharmaceutical company in crisis over a drug that has side effects. I suppose beyond the comedy there is a message about the animal natures of people, the futility of a decorous facade.

Gail: Absolutely. These are the seemingly most civilized and educated of people. Veronica speaks highly of “Western civilization” and her pride in being the embodiment of its highest principles. And yet each of the four characters emits animalistic howls at one point or another. This is where the physical look of this production becomes a key element. In addition to Abe Phelps’ fine set, Shmira Jamie Fine has costumed the actors perfectly, and Allen Phelps’ cool lighting design is spot-on.

Larry: I thoroughly enjoyed this whirlwind of a play, and particularly recommend it to those who are inhibited from telling people exactly where to go. It offers more finger-pointing, name-calling, stomping around and throwing things than any play in memory. But it is also a rare and cathartic chance to live vicariously through the characters on stage, witness a four way prize fight – and then go back to being, well…normal.