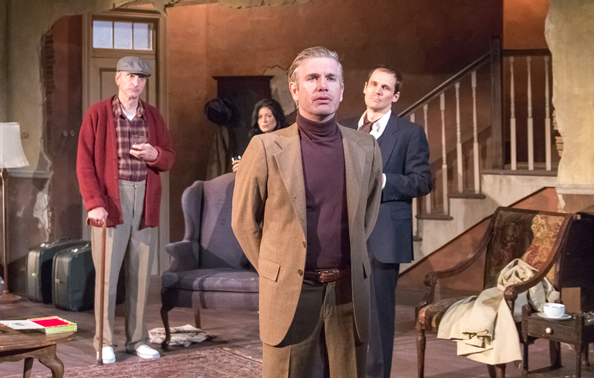 Harold Pinter’s plays make great demands on actors. Ideally, the hallmark “Pinter pause” or “Pinter silence” should be at least as communicative and rich as the spoken dialogue, if not more so. I’ve seen productions where I can feel an actor ticking off the seconds until he or she speaks, and this can render the entire play tedious and slow and one-dimensional.

In a speech presented in 1962 to a student drama festival, Pinter said, “There are two silences. One when no word is spoken. The other when perhaps a torrent of language is being employed. This speech is speaking of a language locked beneath it. That is its continual reference. The speech we hear is an indication of that which we don’t hear. It is a necessary avoidance, a violent, sly, anguished or mocking smoke screen which keeps the other in its place. When true silence falls we are still left with echo but are nearer nakedness. One way of looking at speech is to say that it is a constant stratagem to cover nakedness.”

It gives me great joy to report that this production of The Homecoming, beautifully directed by Eric Hill, boasts sterling actors who are not only up to the task, but inspired, fierce, funny, and fully realized.

Written in 1964, The Homecoming takes place in a seedy North London house occupied by four men, Max (Rocco Sisto), the patriarch; Max’s son Lenny (Joey Collins), a pimp; Max’s brother Sam (John Rothman), a chauffeur; and Max’s youngest son Joey (Rylan Morsbach), a boxer in training. Soon, their territory is forever changed by a surprise visit from Max’s son Teddy (David Barlow), a professor of philosophy, and his wife Ruth (Tara Franklin), who (unbeknownst to his family) married six years earlier and moved to the United States, where they now have three sons.

Rocco Sisto’s Max is a malevolent glory to behold. I’ve had the privilege of seeing this actor in a variety of roles, and each of his creations impresses me even more. I’ve referred to him as a chameleon, but that’s really a poor metaphor, because it doesn’t do justice to the depth of his performances. Once more, in the guise of a cruel, vitriolic old man, he’s astonished me with his formidable gifts.

Joey Collins is at once terrifying and mesmerizing as Lenny, mercurial and unpredictable in an outstanding performance. John Rothman seemed to me perfectly cast as Sam, the object of Max’s ridicule who clings to a shred of dignity. Rylan Morsbach does a fine job embodying Joey, with his perverse innocence.

David Barlow hits all the right notes as Teddy, who for all his mighty efforts to escape his family, will never truly be able to escape its shackles. The lovely Tara Franklin seemed not quite up to the task of her difficult role. I experienced a lack of substance in her silences, and can’t help but feel that if her Ruth were more fully realized, the play would have been that much richer. Ruth makes some shocking choices, but Franklin seemed so indecipherable that the emotional impact was muted.

Kudos to the technical team, including Reid Thompson for his superlative set design, David Murin for his first-rate costuming, and Solomon Weisbard for his exemplary lighting. And I must also commend sound designer J Hangenbuckle. The music (created from Eric Dolphy’s God Bless The Child) was pitch-perfect on every level.