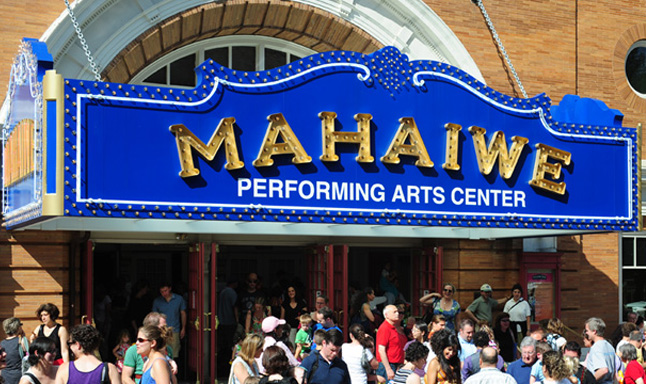 “Deer Tick, with its unpretentious folk-rock songs, and Postmodern Jukebox, with its stylized retro interpretations of contemporary hits, may seem worlds apart, but both groups combine a good-time tone with refined music. Neither is to be missed,” says Mahaiwe Executive Director Janis Martinson. “Then, we have plenty to draw screen audiences into the warmth of a darkened theater, with drama from London to raise your heartrate and classic movies to tug your heartstrings.”

Alternative rock band Deer Tick will perform live on Friday, December 9 at 8 p.m. Formed in Providence, R.I., in the early 2000s, the band has released seven studio albums. Singer-songwriter John McCauley, guitarist Ian O’Neil, drummer Dennis Ryan, and bassist Christopher Ryan display their blues and country influences without twang, bringing nimble, textured sounds to their performances. Called a cult band that “makes sincere, foursquare music with metaphor-packed lyrics” by the New York Times, they keep audiences listening for what will come next. Tickets range from $39 to $44, with discounts for Mahaiwe Members ($5 off) and individuals ages 30 and under ($15 tickets).

The swing music collective Postmodern Jukebox returns to the Mahaiwe stage on Friday, March 17 at 8 p.m. Formed by arranger and pianist Scott Bradlee, the outfit gained popularity online in the 2010s performing vintage-style renditions of contemporary pop songs on YouTube. Having played the Mahaiwe in 2018, Postmodern Jukebox returns amidst its “Life in the Past Lane” tour, a celebration of the greatest 20th century musical genres, fused with recognizable hits of the modern era. The Postmodern Jukebox experience will be brought to life with a cast full of today’s most exciting vocalists, instrumentalists, and tap dancers. Tickets range from $39 to $99, with discounts for Mahaiwe Members ($5 off preferred and premium tickets) and individuals ages 30 and under ($15 tickets).

London’s National Theatre in HD: The Seagull by Chekhov and Shakespeare’s Much Ado About Nothing

The Mahaiwe will present an HD screening of The Seagull from London’s National Theatre on Saturday, November 19 at 7 p.m. Emilia Clarke (Game of Thrones) makes her West End debut in this 21st century retelling of Anton Chekhov’s tale of love and loneliness. A young woman is desperate for fame and a way out. A young man is pining after the woman of his dreams. A successful writer longs for a sense of achievement. An actress wants to fight the changing of the times. In an isolated home in the countryside, dreams lie in tatters, hopes are dashed, and hearts broken. With nowhere left to turn, the only option is to turn on each other. Following his critically acclaimed five-star production of Cyrano de Bergerac, Jamie Lloyd brings Anya Reiss’ adaptation of Anton Chekhov’s classic play to the stage.

The Mahaiwe will screen National Theatre’s Much Ado About Nothing in HD on Saturday, December 3 at 7 p.m. Katherine Parkinson (The IT Crowd) and John Heffernan (Dracula) lead the cast in Shakespeare’s romcom of sun, sea and mistaken identity. The legendary family-run Hotel Messina on the Italian Riveria has been visited by artists, celebrities and royalty. But when the owner’s daughter weds a dashing young soldier, not all guests are in the mood for love. A string of scandalous deceptions soon surrounds not only the young couple, but also the adamantly single Beatrice and Benedick. Following the award-winning success of National Theatre Live’s Romeo & Juliet, Twelfth Night and Antony and Cleopatra, director Simon Godwin returns with this irresistible comedy, broadcast from the National Theatre stage.

Tickets to National Theatre broadcasts are $17 or $10 for ages 21 and under.

Movies: The Wizard of Oz and Miracle on 34th Street

The Mahaiwe will screen The Wizard of Oz from 1939 on Saturday, November 26 at 4 p.m., continuing its longstanding tradition showing the beloved classic over Thanksgiving weekend. Dorothy and her newfound friends the Scarecrow, Tin Man, and Cowardly Lion traverse the Yellow Brick Road, seeking answers and wishes granted from the fabled Wizard of Oz. Tickets are $8 for adults and $5 for children ages 12 and under.

The Mahaiwe will present a free screening of Miracle on 34th Street from 1947 on Friday, December 16 at 7 p.m. A department store Santa Claus sets the stage for drama in this holiday comedy classic starring Maureen O’Hara, John Payne, and Edmund Gwenn. Reservations are required; see mahaiwe.org, or call or visit the Box Office, 413-528-0100, Wednesday through Saturday from noon to 4 p.m.

Mahaiwe movies are sponsored by BUCHWALD.

Tickets to Deer Tick, Postmodern Jukebox, and London’s National Theatre screenings go on sale to Mahaiwe Members on Wednesday, September 14 at noon, and to the public on Friday, September 16 at noon. Tickets can be purchased at mahaiwe.org or via the Box Office, 413-528-0100, Wednesday through Saturday, from noon to 4 p.m.

The Mahaiwe accepts ConnectorCare/WIC/EBT cards for HD broadcasts and movies. Four free tickets to each event per individual.